Still at Summer Camp…but I have an Idea Room Readers Tutorial for you today from Sarah at Create Studio. Sorry it is so late, but things at camp have been super busy, I just barely got some down time before I am off again.

I’ve never been too keen on math. Words I love, but numbers I loathe. (Although for some strange reason I’m drawn to Sudoku puzzles… try to figure that one out!) Anyway, I’m hoping my little Owen will have more of a love of numbers and math than his mommy, so we’re starting early by making numbers into toys!
You can see by the impatient little hands in this picture that these have already been a big hit. He didn’t want to wait for me to photograph his new toys! 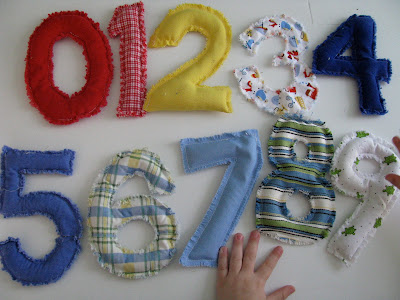 I made these numbers using the technique I used to make my tummy time mat. 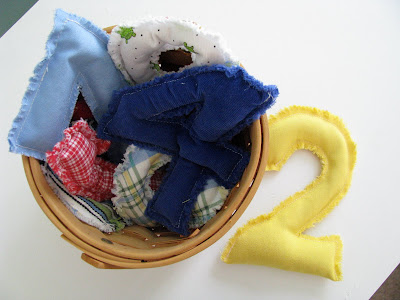 After washing them they get these really great frayed edges, then I stuffed them with rice. (So I guess technically these are more like ricebags than beanbags… ricebags sounds a little weird though!) 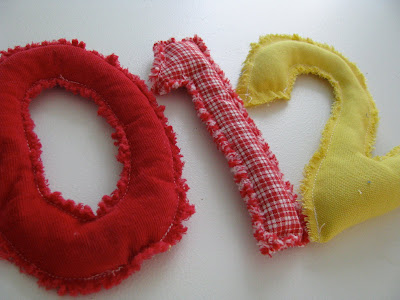 Do you want a tutorial? Well alright! 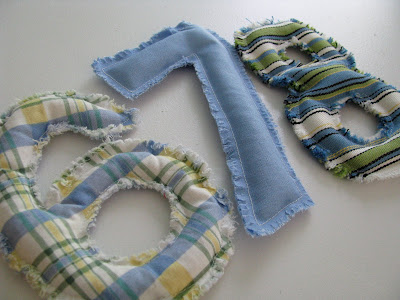 Here’s what you’ll need:
First you’ll want to draw some numbers on your graph paper. I made sure that the width was at least 2 1/4 inches at all points of the number, the graph paper helped with that a bunch. Below are my numbers “4” and “5”. If you would like to print this picture out on a full 8 1/2 by 11 piece of paper you’ll see the scale I used. If you would like the other numbers, check out this post. 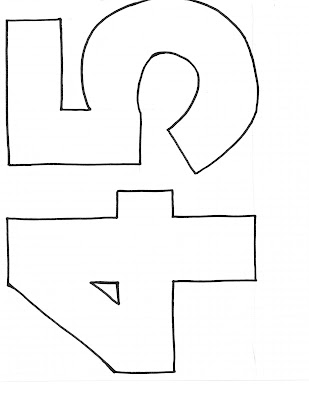 Next, cut out your numbers from the graph paper and pin them to your fabric. Be sure you have the wrong sides of the fabric together when you cut the numbers out. You won’t be flipping these inside out, so you’ll want the pretty side of the fabric to face out. 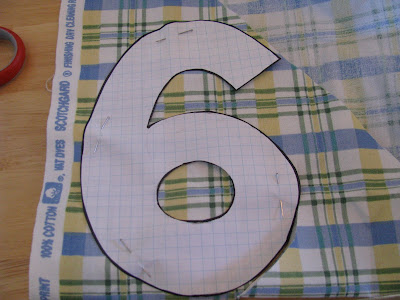 Stitch around the outside edges of each number, be sure to leave a 1/4 inch seam allowance and at least a 1 inch opening to put the rice in later. 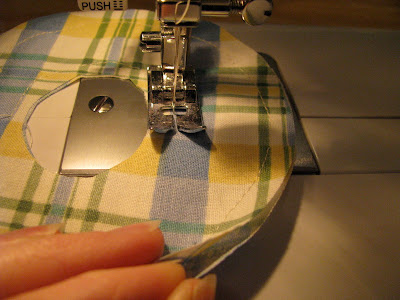 Using some sharp scissors, cut the edges of the number. Be super careful not to cut your sewed edge or you’ll be going back to your sewing machine to fix it. Be patient with this step, it takes some time, but it’s worth it in the end! 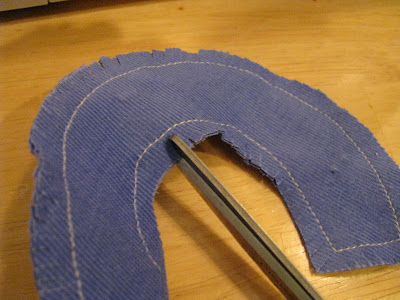 When all of the edges have been clipped you’re ready for the fun part! Throw the numbers into your washer and dryer and the edges will fray beautifully! Your final step is to fill each number with rice using the funnel. I’ve found that a plastic straw works well to jam the rice down into the bottom of the numbers. Stitch the opening closed and you’re all done!

Thanks Sarah at Create Studio for sharing your great tutorial with us today! Go ahead and show her some comment love!