I recently volunteered to help in my daughter’s classroom for her Halloween party. I was asked to come up with the Halloween Crafts the kids could make in about 10 minutes. After seeing a bunch of well used ideas on the internet, we came across an idea to make “bendable mummy dolls.” 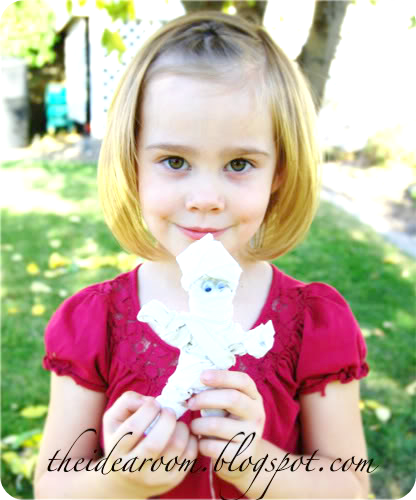 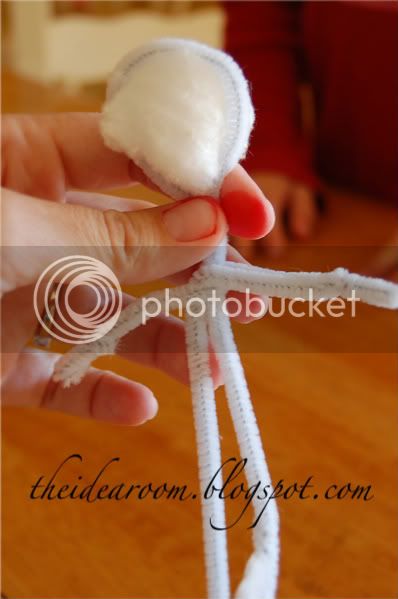 First take two pipe cleaners (any color will do since they will be covered). We picked white to represent the bones of the skeleton. We twisted two together to come up with the basic shape of a stick figure. We started with the head and then worked our way around. Stick the cottonball into a circle made out of the pipe cleaners. (Sorry about the red food coloring stained fingers…that was from some other project).

Then we took strips of an old sheet and tore it into a LOT of tiny strips. Then we just started wrapping the mummy up. I started on the neck and went up around the head and then around each body part. It takes a little practice to figure out how to wrap it for the best look. We then tied knots and tucked the ends of the strips into the cloth to start the next strip. Each mummy took about three 12 inch strips of material.

Then I helped each of the kids hot glue some “google eyes” on their mummies.

They were a hit. Some kids had a hard time with the wrapping. But most really enjoyed coming up with their individual creations. I did it by myself with about 7-8 kids in each station. A helper would have been nice. But all in all it worked out pretty well. I premade all the skeletons because I didn’t think all the kids would be able to do that part. I would not recommend this for classes younger than 2nd grade.