I am so excited to be able to finally share with you our newly updated Outdoor Deck. When I was given the March Lowes Creator challenge, I knew I would finally be able to finish off our outdoor deck just in time for Spring. 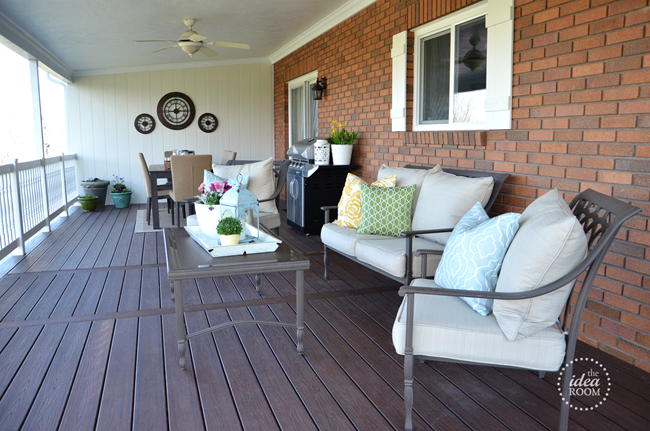 When we first looked through this house when we were searching for a new home 11 years ago, the back porch was one of our very favorite things about this house.  We have always enjoyed being outdoors as a family and we could see ourselves sitting on this porch for BBQ’s, summer evenings and for entertaining family and friends.  Summer evenings in Utah are really pleasant and we were excited for how large this extra space was. 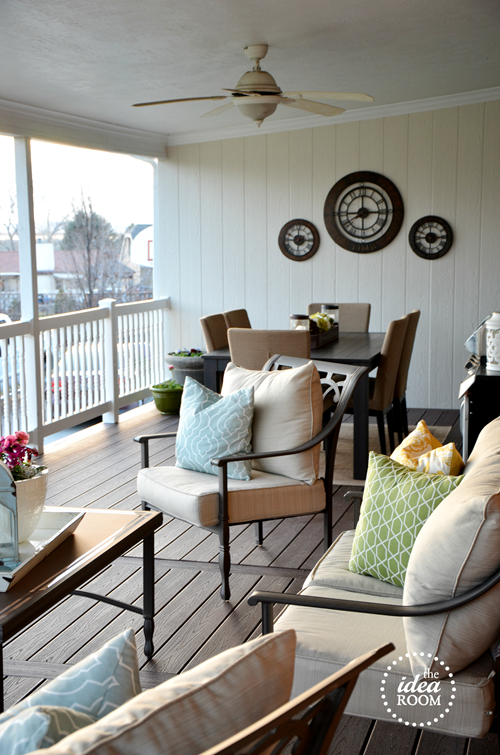 But, it has seen better days.  The deck was covered in an outdoor carpet that was torn and worn out in several different areas.  We knew it had some amazing potential and that it would just take some time and hard work to get it to where we were envisioning. 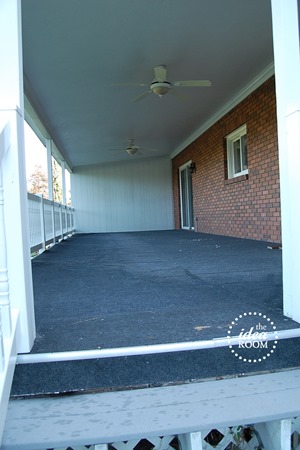 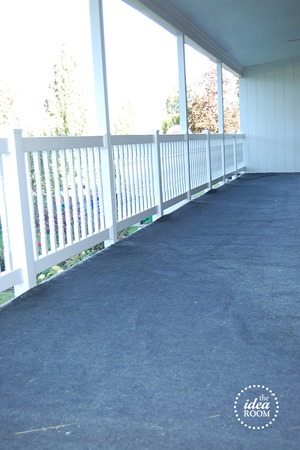 We were planning on doing the deck remodel ourselves.  But as we looked closer at the overall deck and the construction of it, we became concerned that there was a bit of wood rot and we were worried about the overall safety of the 30 year old deck.  So, we ended up hiring someone to rebuild the deck in August of 2011.  And thank goodness we did, because there was a lot of structural damage and some of the main structure had almost completely rotted out.  I will share a bit more of that process in an upcoming post. 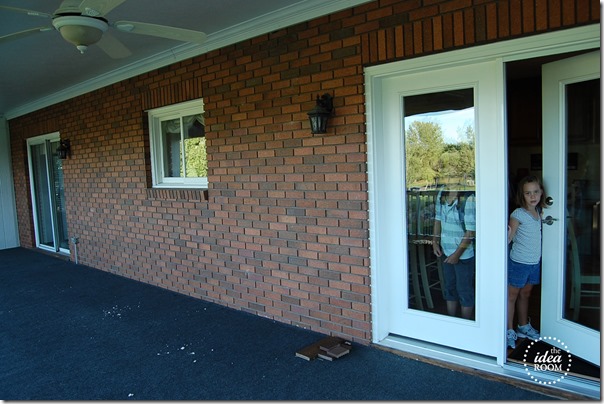 About 7 years ago we bought some patio furniture on clearance at the end of the season and picked up this set for about $350 which is a great deal.  I could only find these pictures of my little family eating pizza out on the deck about 4.5 years ago.  Awww…I miss those babies! 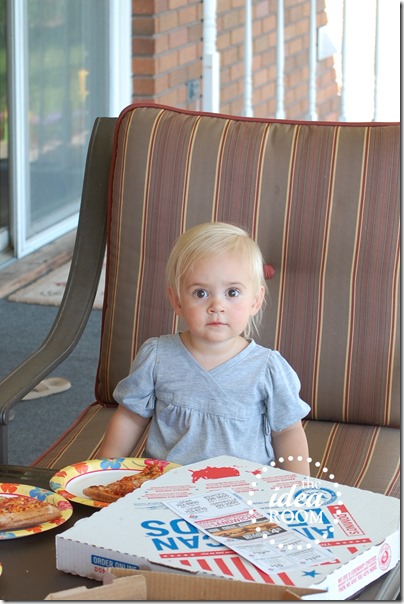 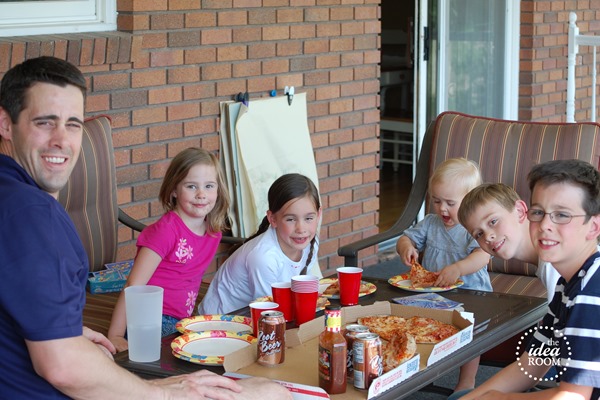 But after 7 years and little kids, the cushions were pretty beat up.  The cast iron furniture was still in great condition.  I had looked into sewing me some new cushion covers, but the price of good fabric had me hesitating.  Then, I saw that Lowe’s carries some awesome Outdoor Deck Furniture cushions and I knew it was the perfect solution.  So I picked some up in this awesome neutral Linen color.  I am in LOVE!!  I love how it stands out next to our darker brick color. 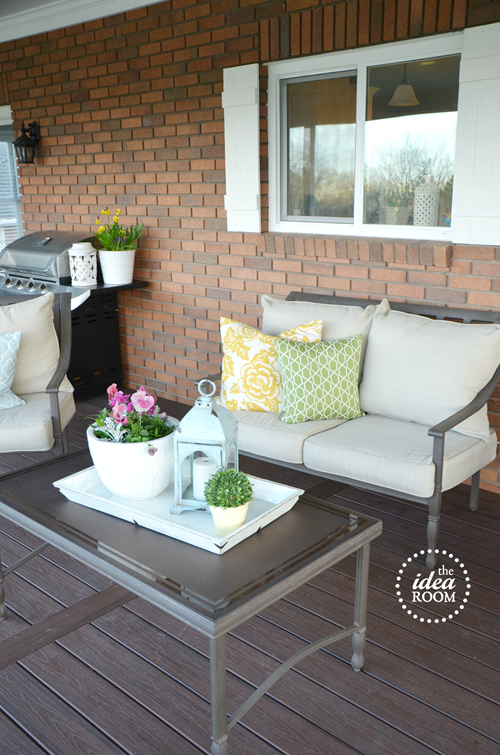 Then I hit the flower section of Lowe’s and picked up some Spring flowers that love the cold weather since in Utah we can get a freeze all the way into May.  I also picked up a couple of flower pots and some potting soil and gave the deck some needed Spring color with several potted flowers. 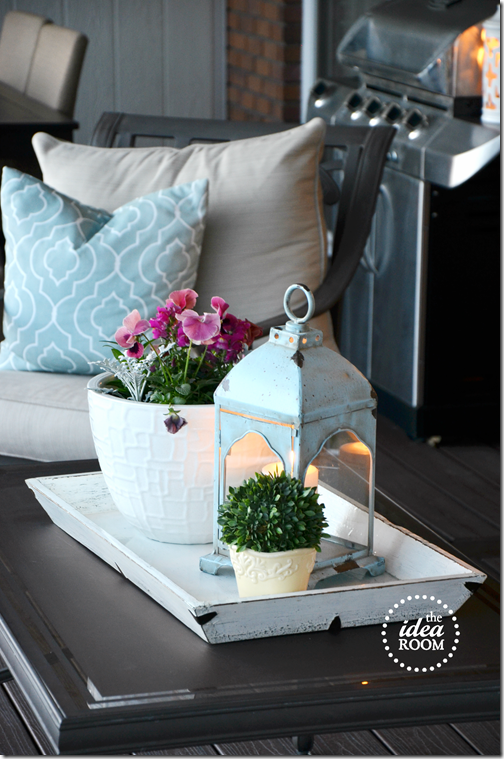 I also immediately fell in love with this cute white pot and made that a focal point on the patio table. 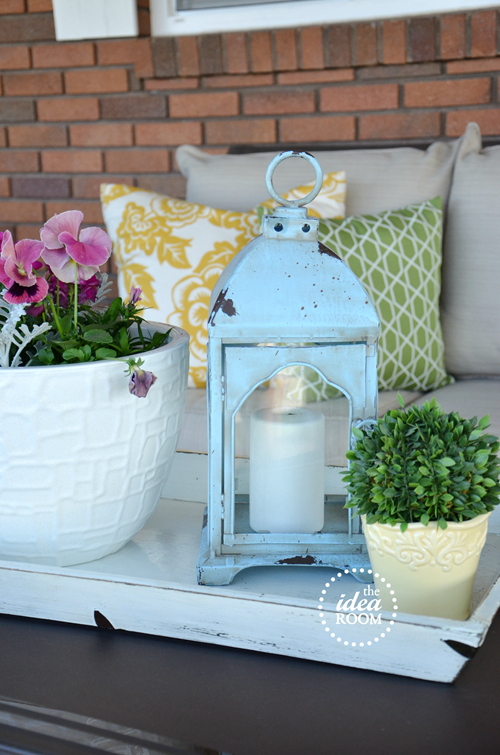 Some Lowe’s locations also carry some cute and trendy decorative pillows.  I picked up the green pillow, and an orange one that I put on my front porch, from a Lowe’s while I tagged along on my husband’s business trip to Vegas this past weekend.  We found them in the St. George, Utah Lowe’s Store. 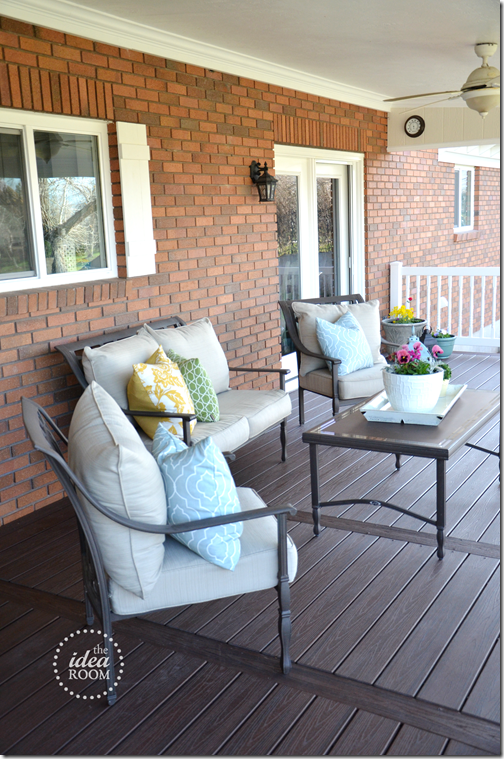 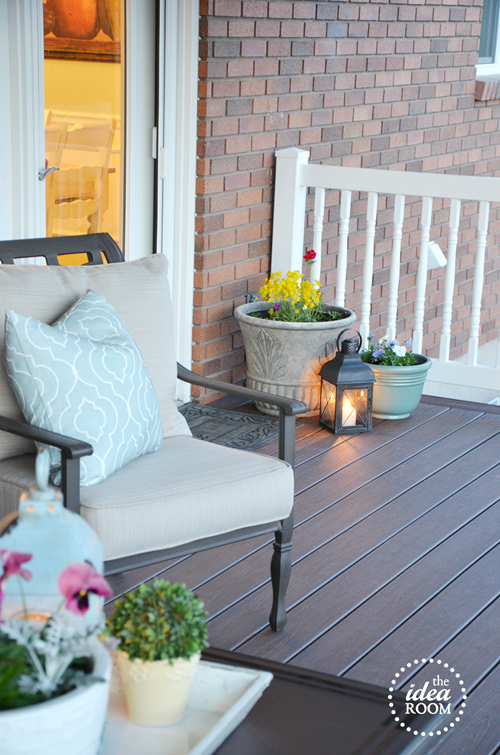 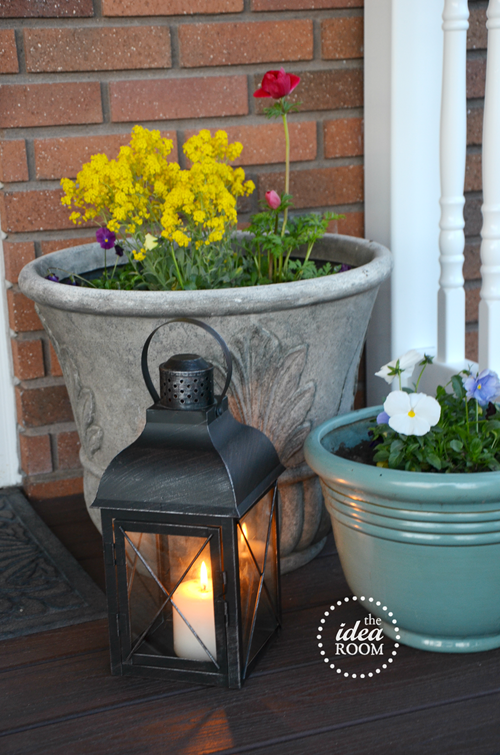 This table and chair set is also from Lowe’s.  I actually picked this one up last fall for a steal at the end of the season clearance sale with some leftover Lowe’s gift cards that I had saved up.  We LOVE it too and have eaten dinner outside as a family several times already!  The floor rug is also from Lowe’s. 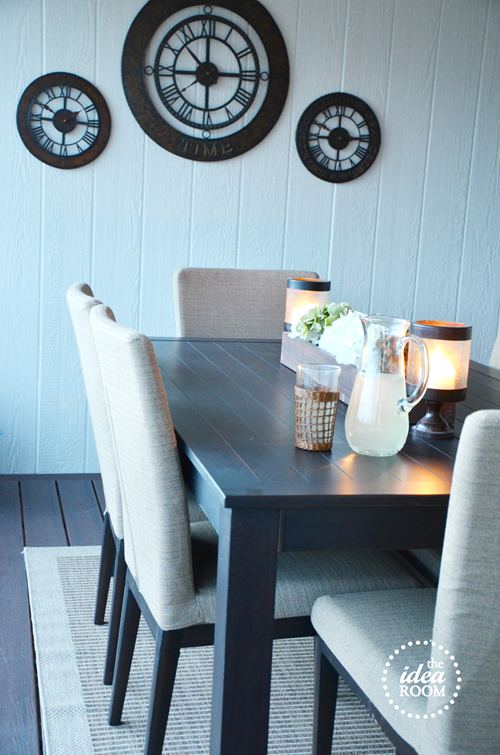 I picked up the three wall clocks at my local thrift store last summer when I was shopping for the DIY Blogger house…and get this…the big one was $4 and the other two were $3 each.  Pretty awesome right? 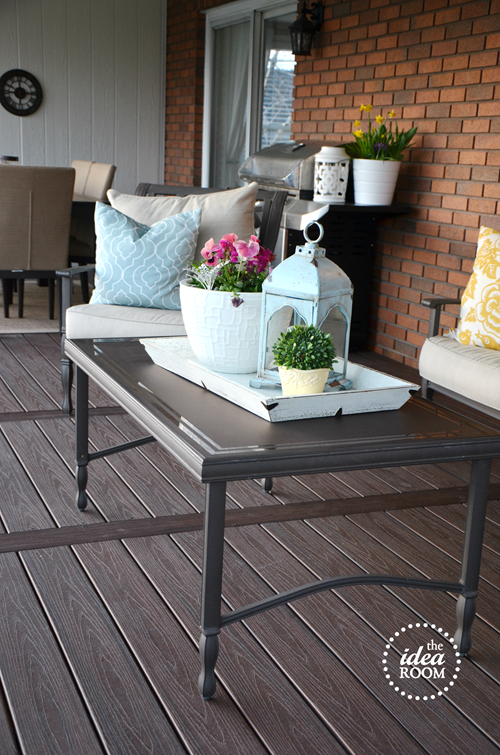 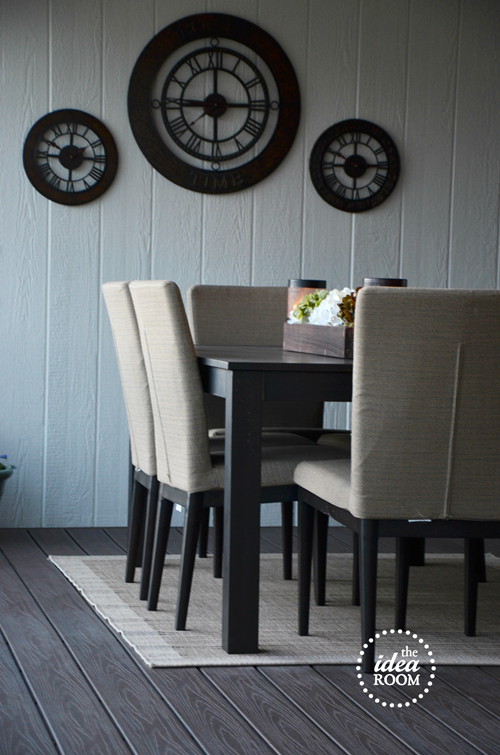 We painted the walls and trim to give it a fresh and clean look and filled in several large cracks that had never been filled in from when the original owners added the moldings.  It makes a world of difference and makes our deck feel like another room in our home. 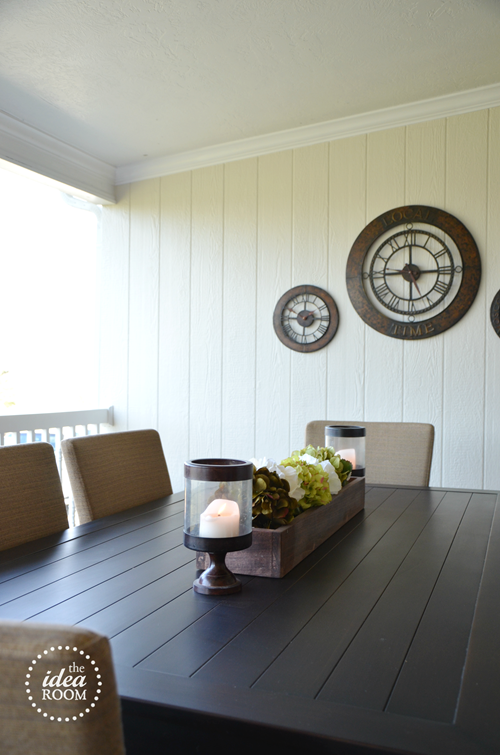 The table centerpiece box was made and shared in an earlier tutorial and I think it has now found its permanent spot. 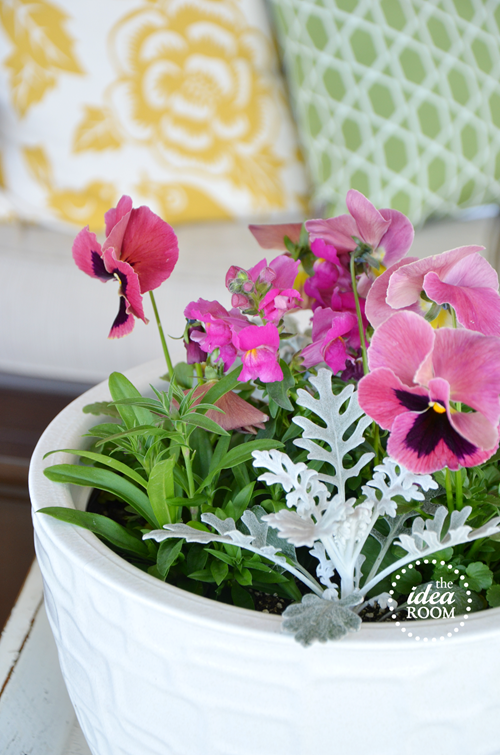 And last, but not least, we built these simple shutters with some wood which I also picked up at Lowe’s.  I am so happy with how they turned out and I think they were the perfect final addition.  The brick wall look a bit barren and I love the crisp, fresh look and texture they provide.  They were super easy to make and very inexpensive.  I will share the tutorial in a later post….so be sure to stay tuned if you are interested. 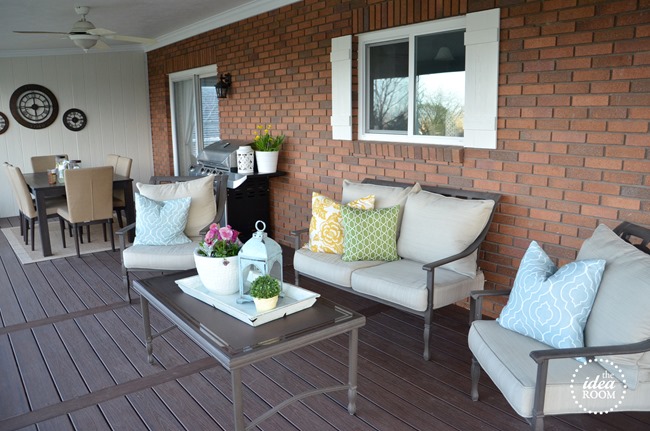 So, I realize that this post contains a lot of different stages of work on our back deck.  In summary, for this month’s Lowes Creator Challenge, we did the following:

Looking for more creative ideas for your home?  Sign up for Lowe’s Creative Ideas Magazine.  It actually has a lot of really great and creative ideas that you can and would want to do.  Go ahead and check it out!

*Disclosure: This is a sponsored post.  Lowe’s provided me with a gift card to showcase a project this month as part of their Lowe’s Creative ideas Bloggers team.  However all opinions and statements are mine.