What a crazy four days.  Early Thursday morning (December 1st), I was awakened at 1:45 am by howling winds.  Here in Utah we can get really strong East winds that flow over the mountains to the East of us and down into the valley.  Usually the winds cause minimal destruction, but every once in a while the winds can reach hurricane speeds.  This storm in particular hit my home town, Centerville, Utah, the hardest .  The city was declared a state of emergency.  These high winds continued for 9 hours averaging a constant 60 mph wind and with wind gusts reaching 102 mph–equivalent to a Category 2 Hurricane. 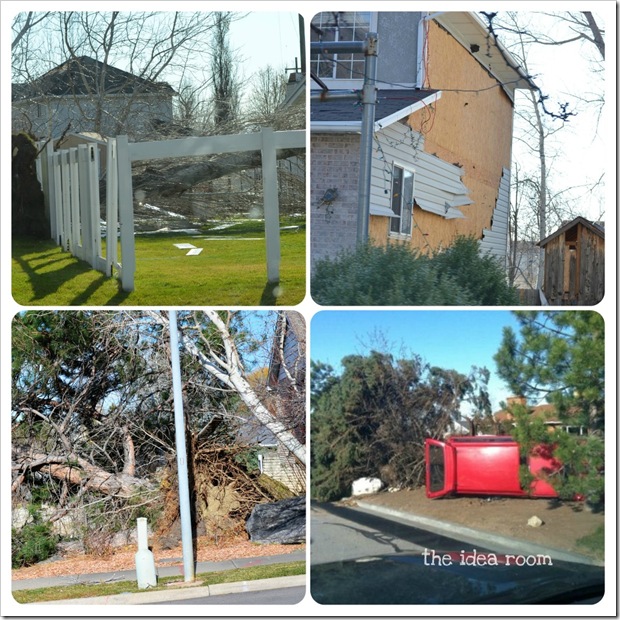 The windows in our home are 30 years old and are not sealed very well, so in large wind storms a tiny bit of air blows through them and creates a loud screeching sound.  I can never sleep when we have these winds.  This time I was sure the windows were going to break with the amount of force that was being exerted on them.  I went and slept in my closet which has no windows and it helped to muffle the sound a bit. 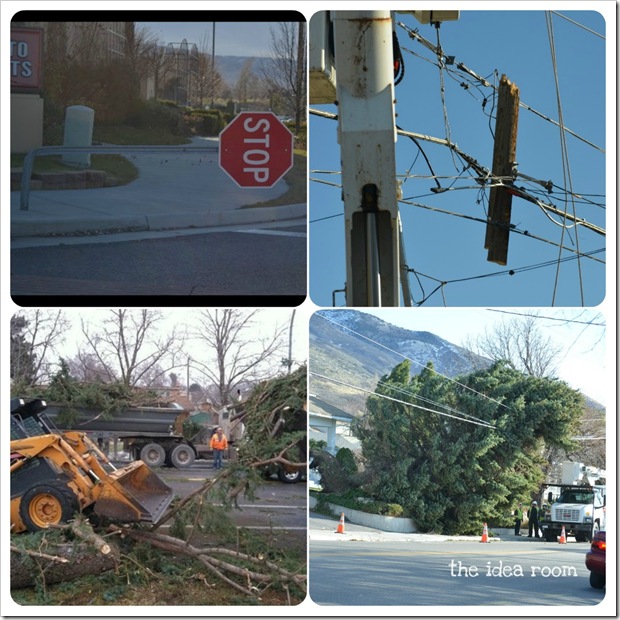 The damage to our city was pretty extensive.  A couple of homes were destroyed, ten semi-trucks were blown over on the freeway, cars were crushed, thousands of trees were uprooted, homes were damaged and power lines were snapped in half.  We were pretty lucky that with the thousands of trees that fell, so many of them missed hitting homes and structures.  We were without power until about 6:00 Thursday evening and without internet until Friday afternoon.  We were some of the lucky ones as some homes just had their power and internet turned back on Sunday morning. 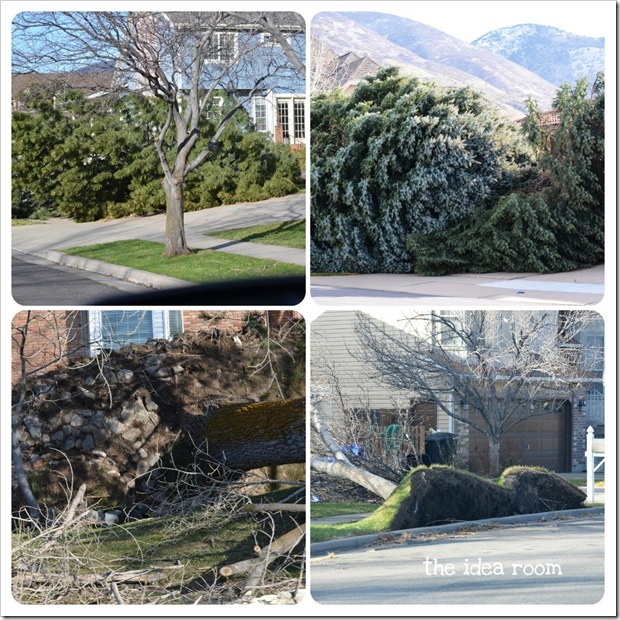 We spent the next 3 days helping our neighbors clean up massive trees that had fallen, shingles, debris, repairing holes in roofs, cleaning up entire downed fences, etc. from sun up till sun down.  Early Saturday morning we had another smaller wind storm with winds measuring 50 mph…I spent another night sleeping on the floor of my closet.  Luckily, we did not sustain any further damage. 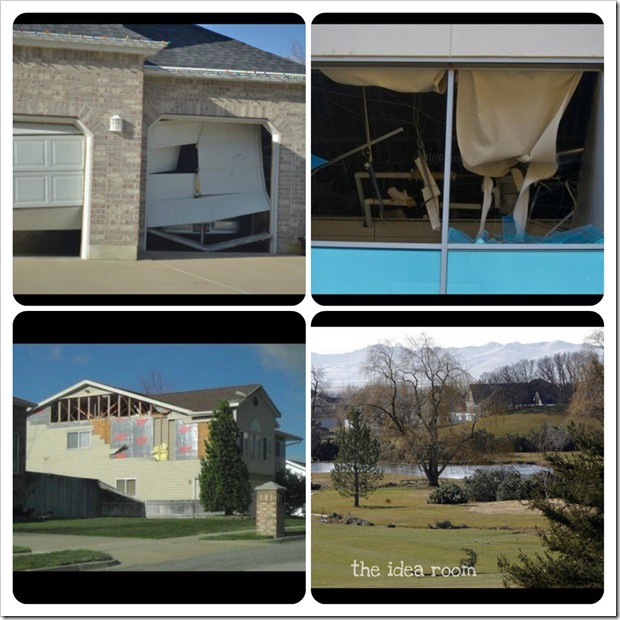 Then on Saturday night the weatherman was forecasting another large wind storm with wind speeds reaching 75 mph to hit us on Sunday evening.  What??  This is crazy!  The last big wind storm we had like this had been over 10 years ago.  I grew up in this same area and had seen a couple of bad wind storms, but nothing like this. 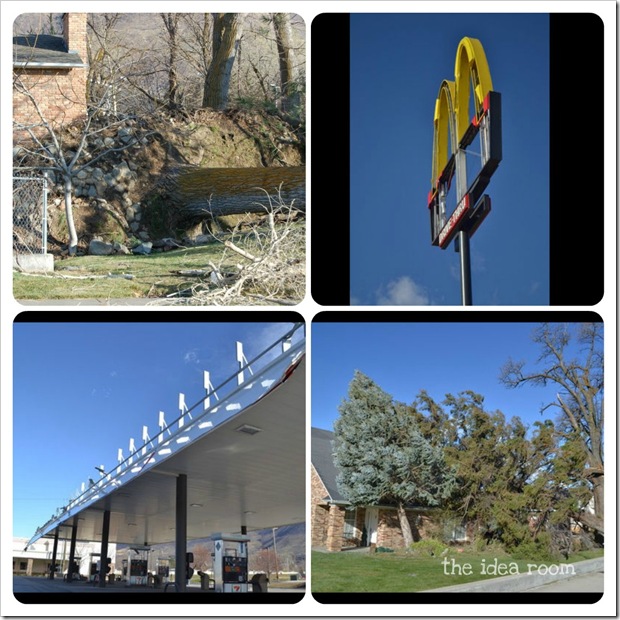 Sunday morning while we were at our church service we were informed that the National Guard had been deployed to come and help clean up the debris and haul it away.  With the impending storm and the amount of debris all over the city, they were concerned that the debris throughout the neighborhoods would become projectiles and cause further harm and destruction to the city and our homes.  We quickly set up a plan and organized everyone and were sent out in large groups to clean up the streets house by house.  Every one was encouraged to bring their trucks, trailers, chainsaws, and work tools to help out in the clean up efforts. 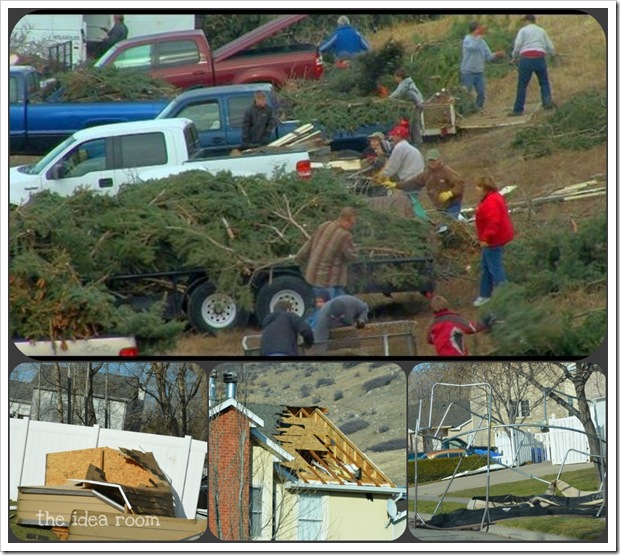 In just four hours with every single church group throughout the city we were able to sweep every single neighborhood in our city and clean up the storm’s destruction.  Which was no small feat.  I can not believe the massive amount of debris there was.  The city parks were the designated dumping grounds of the green waste.  My house happens to be on one of the city parks and the wall of debris is astounding to look at.

Despite the craziness, I felt such a great amount of love for my neighbors who all came together to get done what needed to be done.  The streets were filled with neighbors helping one another out.  I love the area I live in!  It is amazing the amount of work that can be done when every pitches in and works together.  The picture below just one of several parks and churches that the green waste is being placed so that the National Guard can haul it out.  This is only a third of the pile.  If you look really closely you can see my son in a brown coat (should have worn his red one

). He is to your left of the man in a red coat.   You can see that the snow has started to fall as tonight’s storm approaches. 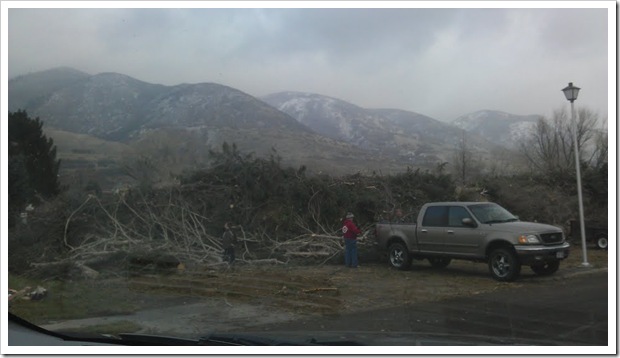 Now we are hunkering down, playing games by the fire and getting ready for round three.  We are hoping and praying that the storm will die out and that we can finally get back to our normal lives.  I have been doing a lot of thinking and although this storm caused quite bit of extensive damage, this is nothing like some of the many other storms and natural disasters that many of you and others have dealt with.  I can not imagine walking out of your home after some of these earthquakes, tsunamis, floods and hurricanes and finding everything obliterated. 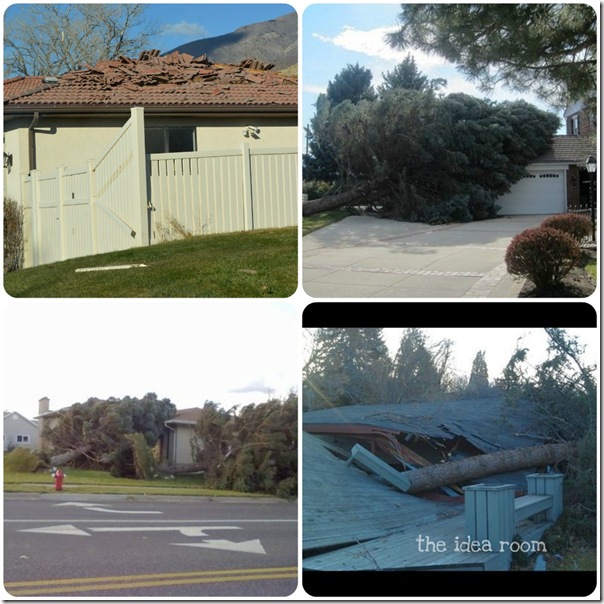 It is times like these that help you gain perspective very quickly about the things that are of true importance.  Such a good reminder as we head into this holiday season.  A season that is becoming more about the stuff you can acquire and receive than celebrating the birth of our Savior, loved ones and serving others.

Here’s to hoping the storm will not produce any further damage or mayhem!

« What’s all the Hype about my Hypo…thyroidism?
Let Homes.com Give YOU a Christmas Bonus! »