You are here: Home / Guest Posts / Photography with Kristen Duke~Knowing your Camera

I just love when this big ole world because a “small world” through blogging! I got emails or comments that some of you readers know my best friend in Connecticut, my grandparents in Utah, or know me and I didn’t realize you came here, too. I’ve read all your comments here and on my blog and just kept smiling at the kind words and stories you have shared with me.  Thanks for making my day brighter!

First off, I live in Austin, TX but visited Utah recently when I photographed Amy’s family.  I shot her session in downtown Ogden near the train depot.  I drove around 5 minutes before I met her to scope out spots, and was lucky to find some.  Fortunately it was a weekday morning, because someone mentioned it was a popular spot on the weekends.
Ok, onto my first topic.

*For a printable version of this tutorial click here.

Since a lot of the questions I got involved effects of certain images, I thought I’d start with the most important and basic idea you should know about your camera.

In going “manual” one should know that there are 3 things to adjust and be aware of constantly:

(I will give a brief explanation below, but if you don’t know those terms at all, may I suggest the book Understanding Exposure. I have it, and I hear it is AWESOME by many photographers, but I just don’t do books well. I like to make things harder for myself. Google and Wikipedia are also excellent, basic resources such as here and here).

This is my camera body, all will be a bit different, but still similar. 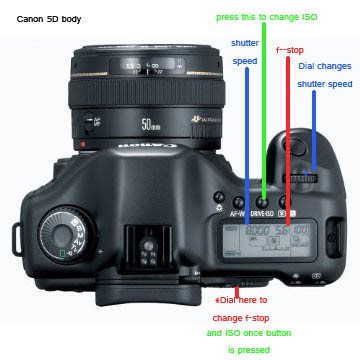 As I change settings, I adjust in this specific order. I shoot 99% in natural light, so first I survey where I will be shooting and determine my ISO (formerly known as film speed).

I have shot in a darker room with only ceiling light up to 1600 ISO. It often comes out grainy, but you can have it well exposed this way. This seems to be a good reason to buy a professional body such as 40D or 5D because they have a better ability to capture images with a higher ISO, unlike bodies such as Rebels. A photographer friend on facebook just got a new camera body and wrote, “1200 is the new 200” which I thought was funny. With that, she meant that she can shoot up to 1200 and have it look as crisp as her previous body could shoot at 200. I would think that those of you wanting to just take better images of your kids, this isn’t necessary. Your flash can help with that just fine in darker places.

Once I have determined my ISO according to where I am shooting, I then move onto my f-stop/aperture. There are reasons this is known interchangeably as both, but look it up if you wanna know more!  I will use aperture here.

In deciding which aperture setting, I have to ask myself—what lens am I using (the better the lens, the ability to go to a lower aperture). An inexpensive lens I often recommend is the 50mm 1.8. It sells for about $100 for both Nikon and Canon, and can really teach the effects of a low aperture with its’ ability to go down to 1.8. I used that as my sole portrait lens for a good 2 years. When I first learned about it, I thought, “but it doesn’t have zooming abilities…” and a friend of mine said, “YOU are the zoom.” It took some getting used to, but a fixed lens (doesn’t zoom) also produces very crisp images.

With an individual, a 1.8 works and if you focus on the eyes, you can get a great depth of field or blurry background (popular question, will answer it more detailed in a later post). If you focus on the background though, you will get a blurry face. You have to change your focal points to achieve this properly (again, later). With a younger child, I’d say something like a 2.2 is good because if they are moving, it will blur their face too much going much lower. 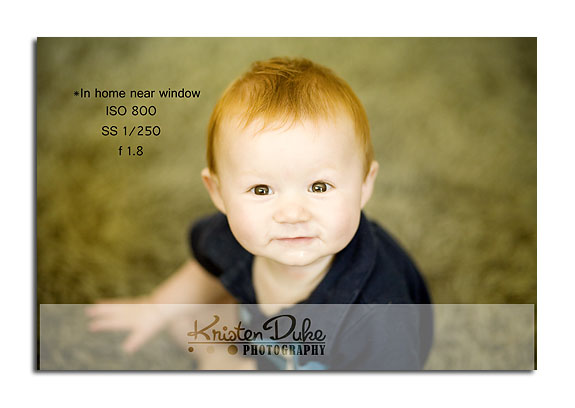 With my nephew here, I shot at 800 ISO (in my home) at 1/250 shutter speed and 1.8 f-stop. His eyes are in focus, and blurred around it. I am always looking for crisp eyes. If they aren’t crisp, I consider it an un-showable (not sure that’s a word) image to my clients. A few other shots I took of my nephew did not have crisp eyes. Not all my shots are nailed:)

Plan to keep your aperture at a number with the number of people you have in the shot. With 2 people, a 2.8. With 4 people, a 4.0. With 8 people, an 8.0 and so on. If I had a large group of 20 people and I shot at 4.0 or 5.6, I run the risk of having those in the center in focus, and those around the edge out of focus. In instances like that, I make sure I have a good “border” around them of trees or background, to better ensure the entire group is in focus, along with my higher aperture.

Lastly, I adjust my shutter speed.  With people, I NEVER go below 1/125 or you will often get out of focus images simply due to camera shake (you think you are holding still, but really you aren’t). Unless you are on a tripod shooting nature. That is my stopping point. Usually 1/250 is good as my lowest, and often go much higher (1/4000) if it is really bright outside. I set the other two, and just play around with this.  This is the easiest to change quickly as needed according to the light.  Here is my example as the sun came in and out from behind a cloud.

The first three are shown SOOC (straight out of camera, no editing involved) and the last is after editing. I want you to be able to see that the images are fairly consistant, yet I had to keep changing my shutter speed as the sun came and went behind a cloud. The third one has more red skin with the sun, but the red can be reduced in photoshop.  I don’t often shoot in full sun, so don’t come across this dilemma often.  Editing can’t fix a bad image, but it can enhance a good image to look amazing.  More on that later–isn’t this long enough?

So here is a challenge. Go outside in the open shade. Next to a fence or bush that is shady, but not too dark. Take a child or stuffed animal and place them in that spot. If it is your child, don’t get them all dressed up because they you will get upset if the images don’t turn out right.  Don’t even worry about a smile or them looking at you.  Just take the shots to practice and learn!

Take a shot.
If it is too bright still, crank your shutter up to 1/300. If it is too dark, go down to 1/125 or move your ISO up to 400 or 650 . Adjust your settings until you get what you like. If you don’t know how to adjust your camera, see the manual for your specific camera, each model is a little different.

I hope that helps you get more familiar with your camera!  It is a LOT of information, but if you really study this post and possibly use that book/links I suggested, you will be SO much closer to properly exposed images and you will be so excited!  Seriously, something worth cheering about.  It is scary, but such a major accomplishment as you get closer to understanding this complex formula.  Please, let me know how your experiment goes!

Any questions on what I wrote here? I will answer in the comments as you ask.