I feel a bit unqualified to cover photoshop, but I’m just going to speak in my own personal language and hopefully this will reach some of you.
In a minute, I will show you how I got this before and after.  Sit tight. 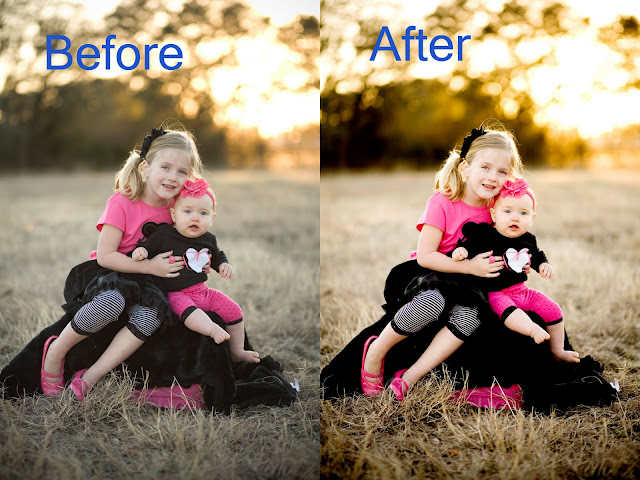 First, let me say that I used photoshop elements 2 for a loooonng time.  I currently use Photoshop CS2, at the shock and awe of fellow photographer friends that I haven’t upgraded to the current CS4—soon to be CS5. I’m good with my CS2. I have suggested to many friends to start with a basic version. I believe you can go to your local Sams Club and purchase photoshop 6 for about $80. However, some of the steps I will discuss here may not be in that version. Since I only had elements 2 and CS2, I don’t really know or remember what tools are in what versions. But some basics I can remember.

Photoshop language is a foreign language. A few years ago, I’d ask how to do something, and I’d hear “blah blah blah blah blah blah blah” as the response and I sat there with my jaw dropped staring at the person who just spoke to me. Ok, maybe I was staring at my computer screen as I read the words, but same thing, right? This, like switching to manual settings can be a frustrating process that will not come overnight. I’ve never liked when my husband says to me, “Don’t try to do it all at once.” And my reply would be…”but I want to, and I don’t know which to choose first!” This is true about the photography process, you really have to try to work on one thing at a time…but do what you will:)

I do use a few actions in my processing. For those new to this term, an action is a pre-written “recipe” if you will for a several step process in photoshop. Some actions have 2 steps, some have 10, some have 20. Each step makes up a part of the overall process that produces a different look on an image. Google “free actions” and you will come up with a bunch. I have only purchased one or two sets, and out of the one set that I purchased with 30 different actions in it, I use just one in my workflow. Last I checked, actions can only be used in photoshop 7 and above, but there are resources out there that have made actions for elements, they are just used a bit differently (google photoshop elements actions).

I use actions to 1)Pop my color 2)my chosen black and white 3)watermark my images. I pop my color with a soft light layer. My favorite action that can be purchased, I got from Kylie Banks, over at Phaunt Actions in her color workflow set. She sells her set for $35, and my favorite action is the “snap it.” Sometimes I have to lower the opacity of the action. Opacity is the measure of how opaque or see-through you make a layer. If I play the snap it action at 100%, I get one look.  If I lower the opacity to 50% I get half as much “boost” of that particular action.

Let me tell you a secret you may not want to hear. Just because you have the actions that another person uses and gets great results from does not mean you will get the same results. Many tweak their actions or take out some parts or combine them with others. A few years ago, there was a workshop called The Secret. A local friend of mine went (paid $1000) and with the workshop, you got THE action that was supposed to make your images look just like the instructors. She had some great stuff, I just wanted the action, not the workshop. My friend let me play with the secret action in photoshop and guess what? My images didn’t look like the instructors! So much for the secret…….

Are you still with me? Confused yet?

OK, here is MY workflow—or steps I take to get my images to my own personal perfected state.  I have it combined in an action, but I am breaking it down here.

Let me just say that I shoot in RAW. This is opening a whole other can of worms, but I must mention it. I won’t go into detail what I do here, but shooting in RAW allows you to do minor tweaks to exposure and saturation on a file before converting it to JPG. If there is an interest, I could go into detail later, but I think most people are shooting in straight JPG’s. Shooting in RAW just makes processing 300 images per session MUCH faster. I love it.

When you look at this image below, it isn’t all that bad.  A little dark, but decent, right?  It isn’t until you see it as it could be that you realize it could be much better. 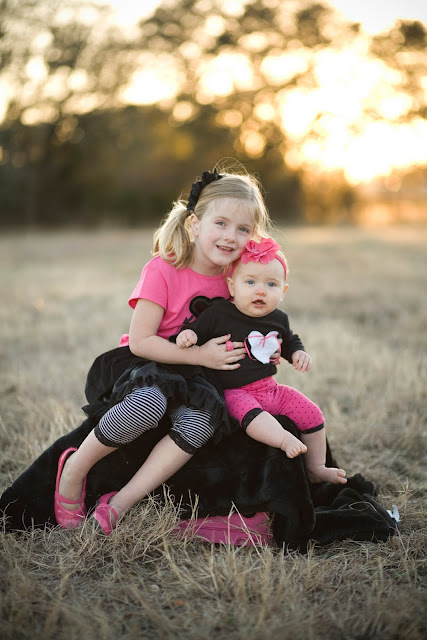 1. I open up my JPG file and see what needs to be done.

a. Is it too dark? To lighten, I open up levels—control “L” There is a slider (3 arrows under the histogram/mountain) and I can move the middle arrow right or left to lighten or darken. Play with the 3 arrows as you look at your image to determine a stopping point. Lightening a slightly dark image is easier than darkening a slightly light image. Blown images (too much light) are harder to save. After you like it, hit OK. 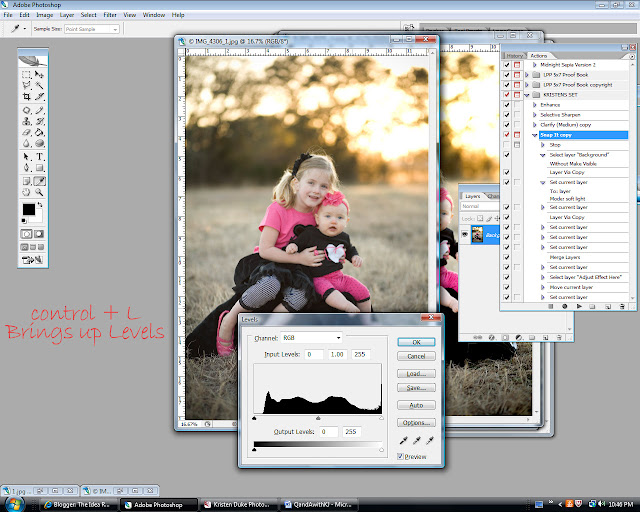 b. After I’ve played with levels, I go to the soft light layer. Not sure this is in all versions of photoshop, please let me know! I go to the top menu where is says: File Edit Image Layer and click on LAYER. From the drop down choices, I select DUPLICATE LAYER and hit ok (see sample below). 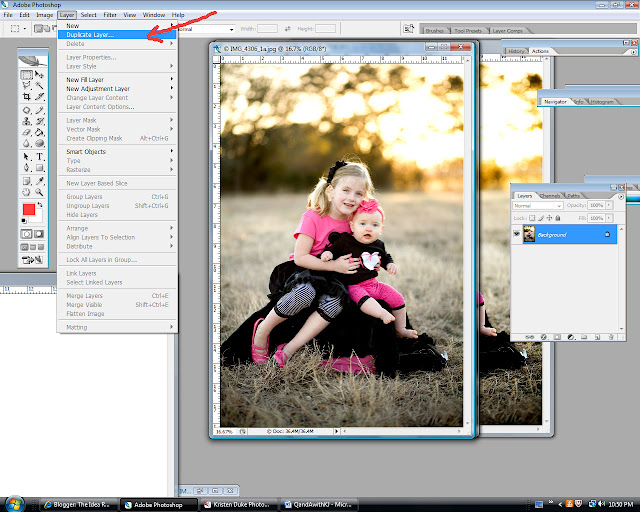 Duplicating my layer allows me to have two layers of my image on top of each other. Keeping my original on the bottom, that layer stays the same. 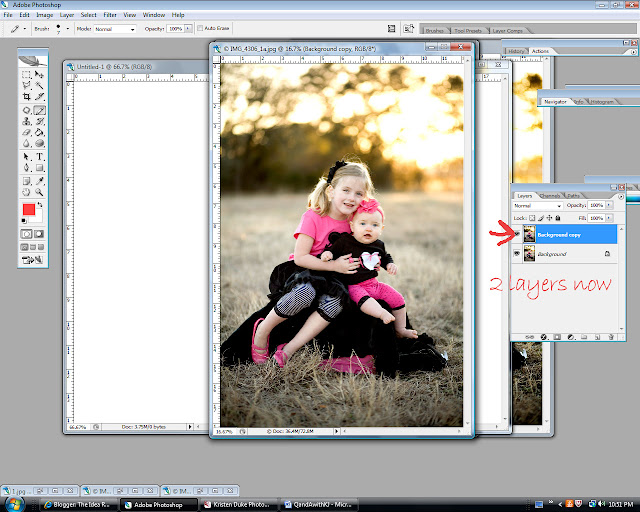 Once my duplicate layer is highlighted in blue (it says background copy here) I can add the soft light layer. 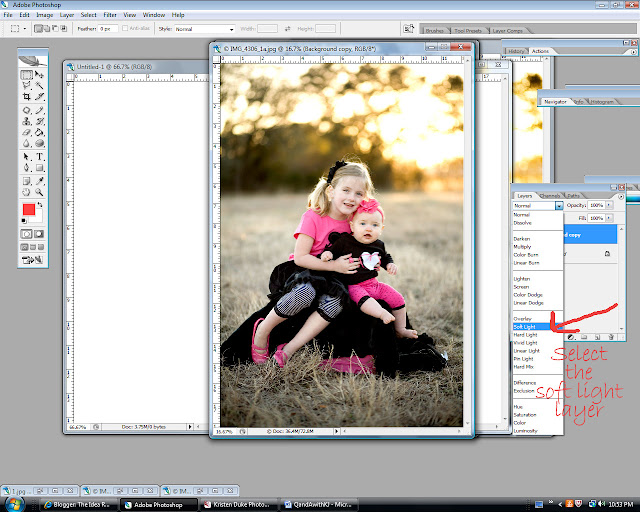 Tweak the opacity to your liking. 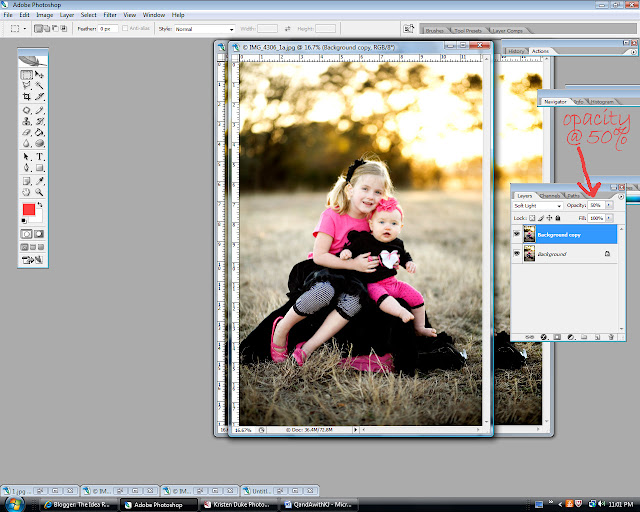 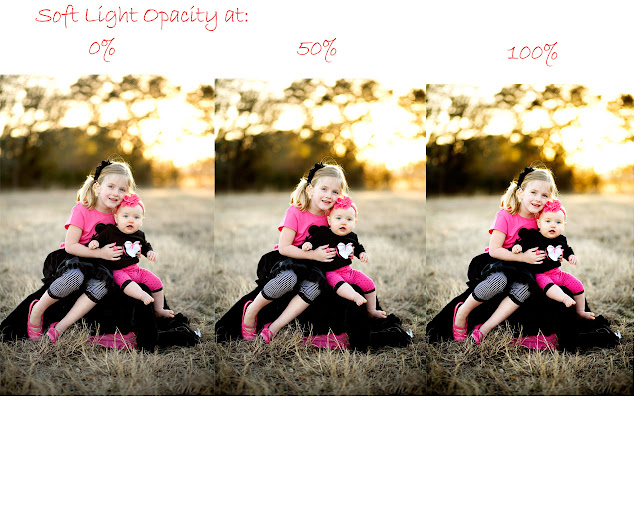 I like 100%, the only thing that bothers me is the trees in the background got a lot darker (middle left).  I can dodge that a bit after.   I love the skin glow, so I stay with 100%.  The image was slightly underexposed, mostly it was just foggy.  If it were darker, the soft light layer wouldn’t look right. That is why it is important to do the levels before to lighten an image as needed first.

I tweak the top layer to my liking and eventually merge the two layers (layer + flatten image) into one. 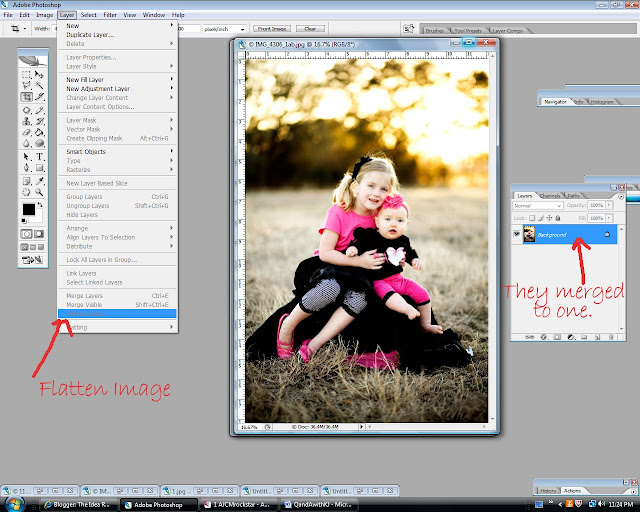 c. Now, I want to lighten that dark patch of trees in the back, left. I get my dodge tool, have the flow sorta low so it doesn’t go all white, but just a little.  The brush size big so it just “dusts” the area we want to lighten. 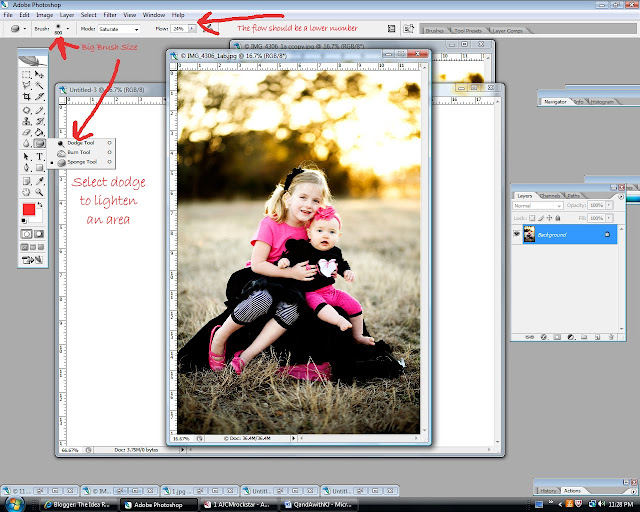 You can see my brush size and how it lightened just a touch.  Just go around in a little circle.  If you’ve done too much, go back a few steps with control+alt+z. 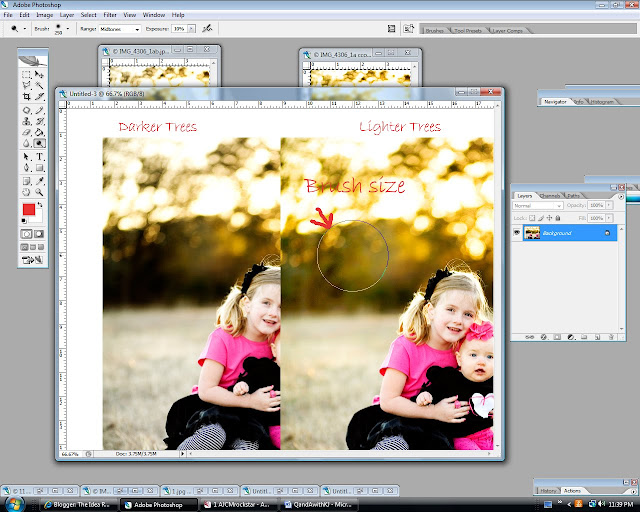 I use dodge/burn/sponge a LOT. It is in the same spot, you just right click on the square for the button to change. Dodge lightens an area. Burn darkens it and sponge gives a burst of saturation. 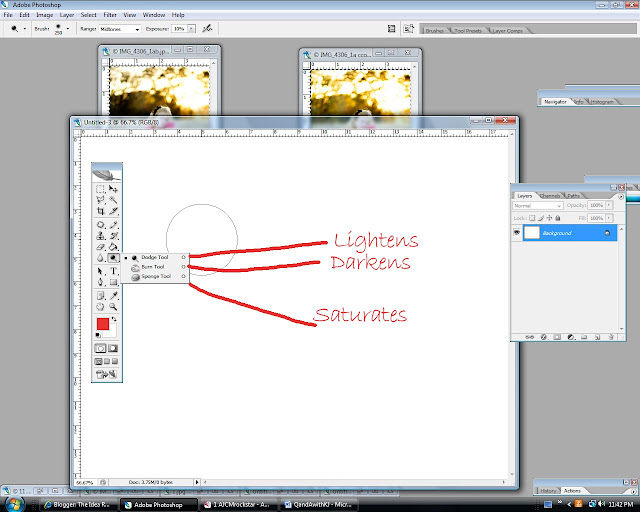 Next, I get the SPONGE and want to saturate the color in the trees and grass. It stays at the same 25% flow and I run my circle tool in circles around the areas I want a bit richer in color, making sure to avoid the skin tones (they will turn orange). 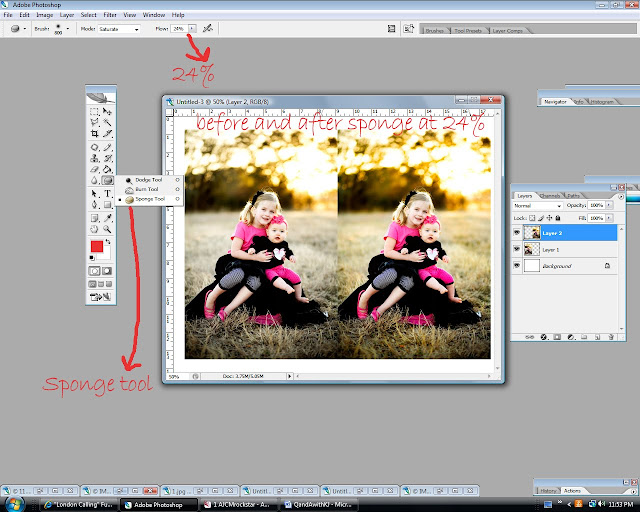 Just a little, not too much.  But if you want more, up the opacity to a higher percentage.

There is your basic color pop.  Let me take a bow, because with all those screen shots, this was a beast of a post.  Any specific question on what I did (nothing is stupid, believe me, I asked a lot of “dumb” questions back in the day)?
Any specific photoshop techniques you want to learn?  Head swap? blemish remover? Text on an image?