Last year (2012)for Christmas, Santa brought our youngest her very own Grocery Stand.  With 4 older siblings, we just didn’t need any.more.toys! We already had a bunch of “groceries” that the kids were playing with in their playroom, but didn’t have a fun way to store or display it.  So, Santa thought it would be a great idea to make a DIY Grocery Stand.  I can’t believe I haven’t shared this with you yet (over a year ago), but nevertheless, here it is.  Once again…please excuse the bad cell phone pictures.  Still waiting on my camera that is going to be replacing the one that just broke. 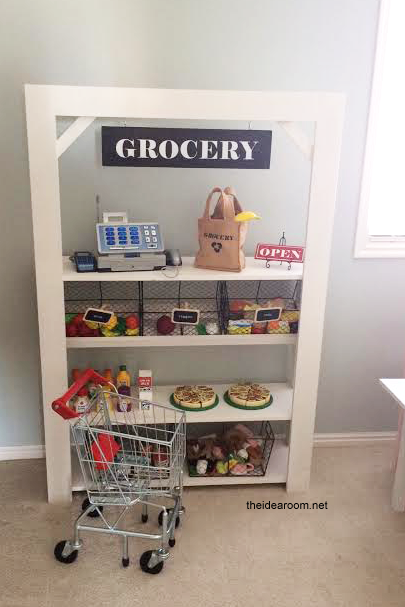 We started out by building a basic shelf design.  Instead of closing off the sides of the grocery stand, we left them open so that the design and expense was very minimal. 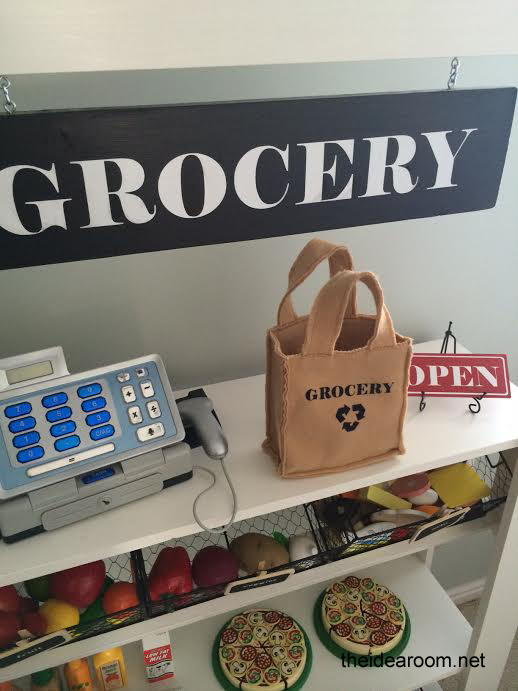 We have three flat shelves (including the top shelf) and then we tilted the 2nd shelf so that it was at an angle for the baskets.  We had the baskets beforehand and used them to determine how wide and deep to build the grocery stand.  We didn’t want to have to find the right size of basket AFTER it was built.  The baskets came from Home Goods. 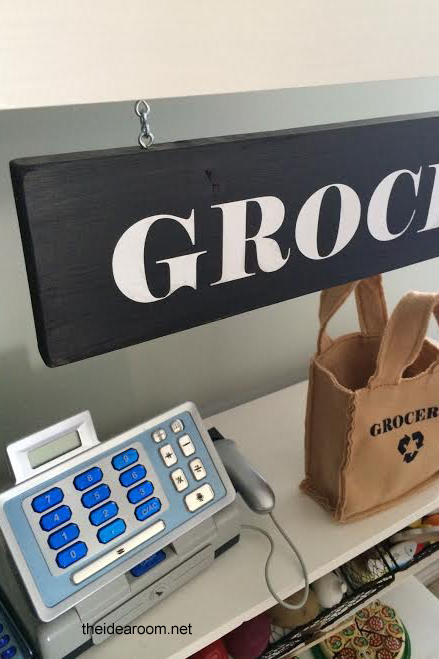 We built a top section of the stand so that we could hang a “GROCERY” sign from the top…which is one of my favorite parts.  We simply attached the sign with some eyehooks.  The sign was made with some vinyl I cut on my cutting machine. 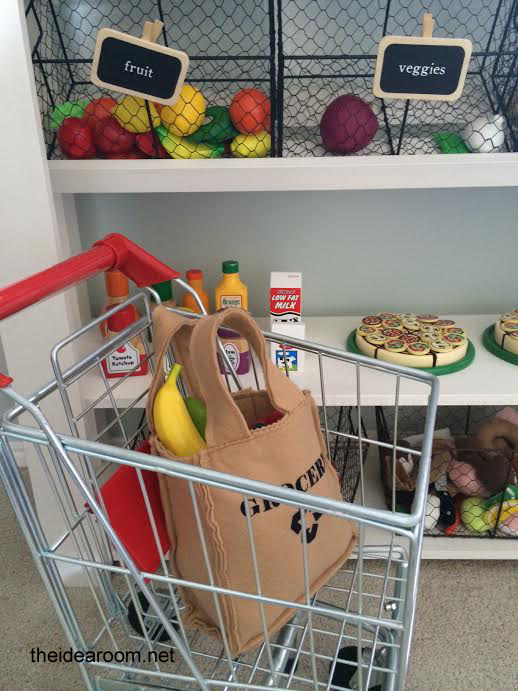 Of course we had to have a fun little kids sized grocery bag.  I made this with some felt and have plans to share with you the pattern here in an upcoming post.  I added the iron-on words and recycle sign with some iron on material…or you could stencil it on. 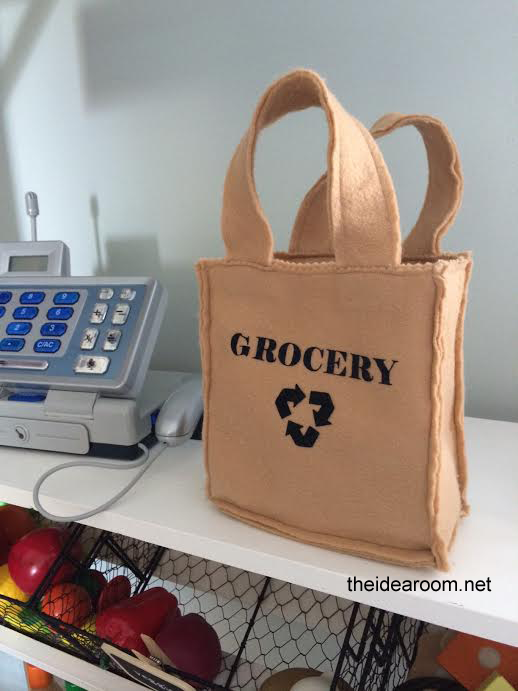 In true…DIYer fashion…this was a terribly last minute project.  We didn’t know how to keep it under wraps so it was literally thrown together in two nights.  The first night it was assembled and the second night (Christmas Eve) it was painted.  The paint was literally drying under the Christmas tree haha! 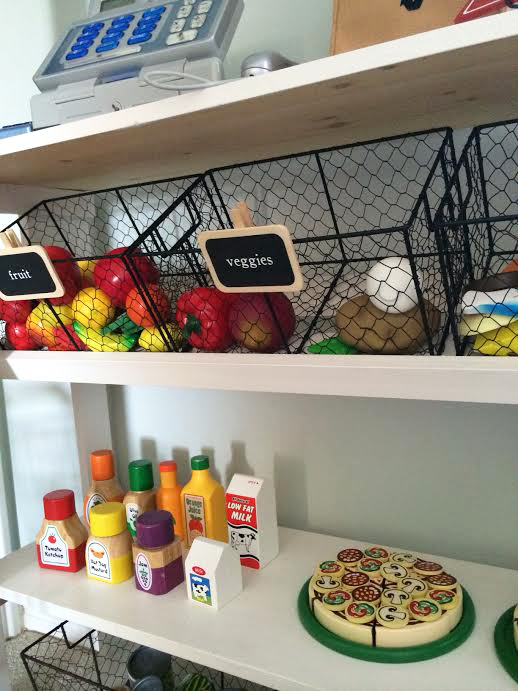 But all is good that ends well.  It was a hit!  It continues to get a lot of use and the kids (even the big kids) enjoy playing with it.  I can’t tell you how many times I have eaten a wooden pizza washed down with a pretend gallon of milk. 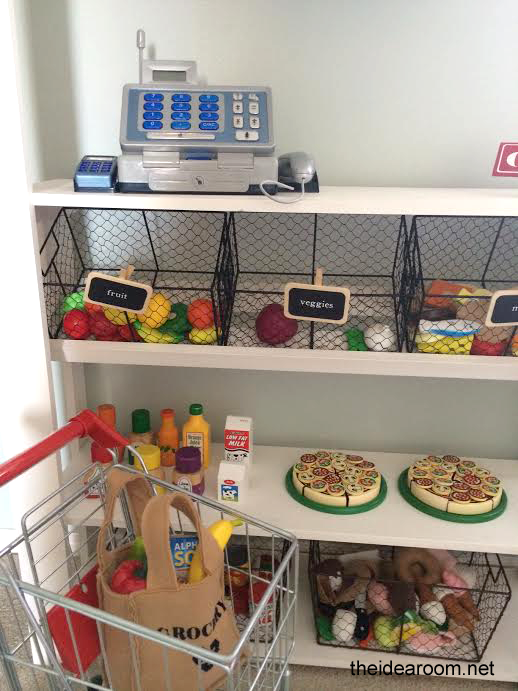 The inspiration for this project came about because she wanted this Melissa and Doug Grocery Cart for her birthday (which was a couple of months before Christmas).  It was just begging for a little grocery store! 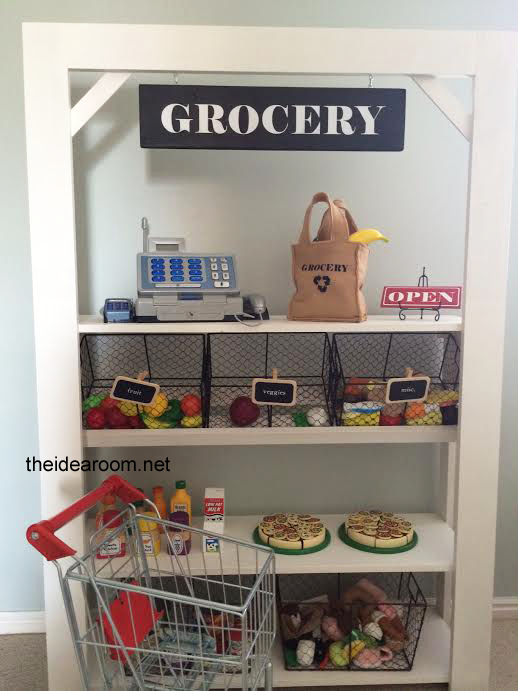